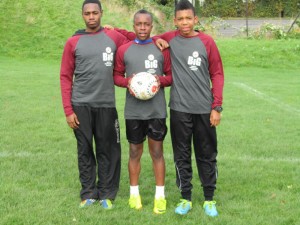 I delivered another successful work experience scheme during the Autumn Half Term 2013 Holiday Football Programme. This time 3 boys took part in the scheme who were younger than the boys in first programme. There were two year 10s, Darnell Austin and Liam Gordon and one 2nd year college student – Rhys Martin.

“I would like to thank Lionel for giving my son Darnell the opportunity to work as part of BiG staff during the half term holiday. Darnell has thoroughly enjoyed working with Lionel and his team. I believe this experience has improved Darnell’s socials skills and given him a real insight to life outside his regular comfort zone”
Russell Austin, Darnell

Taking on feedback from the first scheme, I organised a half day induction day which helped the boys bond and more importantly, appreciate what was expected of them. I was able to feedback experiences from the first programme, in particular, challenges and discuss and agree with the team on strategies on how best to minimise them. The workers were also able to induct onto the scheme in a more relaxing environment performing their initial duties without any kids around therefore enabling the football programme to kick off more efficiently the following day.

“When I told Liam he had been booked into a work experience programme with BiG during his half term break he was not very enthusiastic. However, he was up bright and early on Monday morning for his first day at work and as the week progressed, he became increasingly enthusiastic and looked forward to the next days’ challenges. Liam showed a genuine interest in the children on the programme and put a lot of thought into how he could get the best out of them based on their individual skills and nee


During their induction half day, the workers received their daily diaries where they were expected to log their experiences, and rotas and as there was a lot more time, I was able to run through each task on the rotas in more detail and confirm with the workers that they understood what was required for each task. On reflection, this is something I took for granted last time around.

“I noticed a big change in Liam’s attitude at home following the first few days on the programme; he seemed to have gained organisational skills that he didn’t have prior to the work experience. He also now seems to have a more sympathetic attitude towards his fellow pupils at school who are not as physically able as he is when it comes to spor


All the boys performed their tasks to a really high standard and demonstrated some really good leadership skills. Again like the first scheme, all of the workers had the opportunity to lead on some activities and I was impressed with the way they controlled the group displaying clear communication skills including showing very good demonstrations ensuring that the children were aware of what was expected from them during the different activities. They also encouraged team working amongst the participants and clearly earned the kids respect!.

“Liam thoroughly enjoyed the programme and is using the knowledge he gained in his PE lessons, which he has chosen as a GCSE option. Lionel has been very encouraging and a great inspiration to him and he is looking forward to taking part in the work experience programme in 2014!”
Sharron Gordon, Liam

Thank you all for your efforts, commitments and for being great team colleagues!